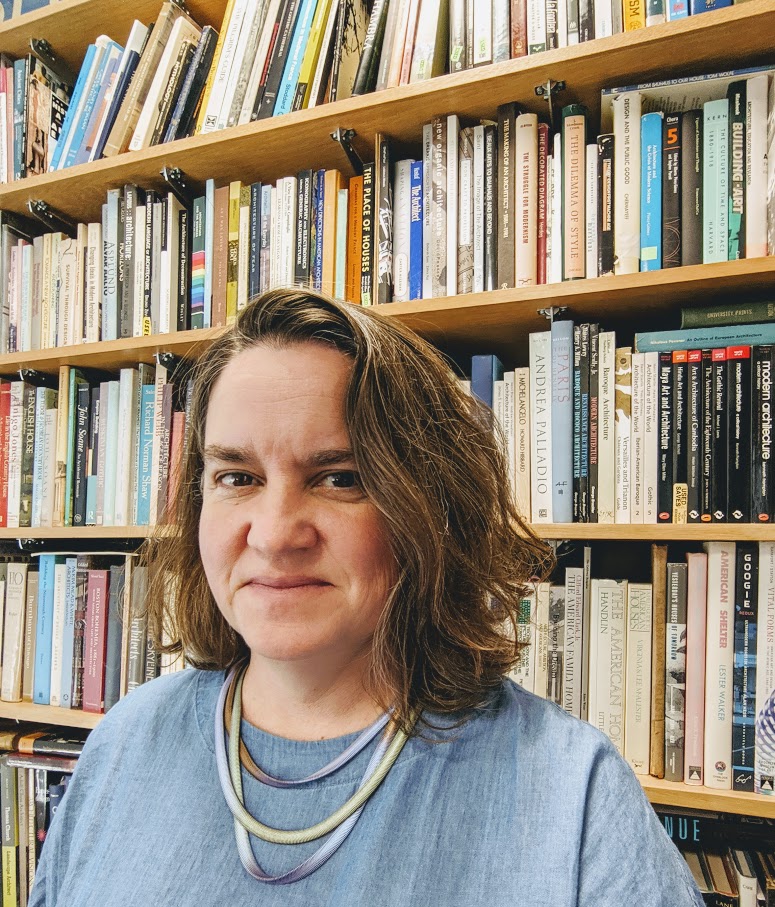 Kathryn (Kate) Holliday is an architectural historian whose research and teaching focus on the built environment in American cities. She studied architecture, art history, and environmental studies at Williams College and the University of Texas at Austin and she brings this interdisciplinary approach to the classroom and to her writing. Her most recent project is The Open-Ended City: David Dillon on Texas Architecture, a collection of essays by the late architecture critic that delves into issues of downtown redevelopment, urban sprawl, planning, and historic preservation in Texas cities in the age of postmodernism (University of Texas Press, 2019). Her two prior books are Leopold Eidlitz: Architecture and Idealism in the Gilded Age (W. W. Norton, 2008, winner of annual book awards from the Victorian Society’s New York chapter and SESAH, the Southeast Chapter of the Society of Architectural Historians) and Ralph Walker: Architect of the Century (Rizzoli, 2012). In 2020, the Texas Society of Architects awarded her the Flowers Award for Excellence in Promotion of Architecture through the Media.

She is currently at work on several projects, including Telephone City, a book exploring the history of telephone buildings since the invention of commercial telephone service in 1876. A preview of that research can be found in the essay, "Building A National Network: Telephone Buildings in the United States," published in the Society of Architectural Historians Archipedia: https://sah-archipedia.org/essays/TH-01-ART-007

She has also contributed chapters to books on O'Neil Ford (forthcoming from Wasmuth Fall 2020) and Howard Barnstone (University of Texas Press, July 2020) which reinterpret ideas about modernism in Texas. Her scholarly essays and articles on the history of architecture education, the AIA, and urban history have appeared in the Journal of the Society of Architectural Historians, the Journal of Architectural Education, the Journal of Urban History, Journal of Urban Design, Studies in the Decorative Arts, the Encyclopedia of Southern Culture, and the Dictionnaire des Creatrices. She has also lectured widely on her work in public venues like the 92nd Street Y and the Skyscraper Museum in New York, the Dallas Museum of Art and the Modern Art Museum of Fort Worth, as well as at universities and academic conferences from Havana to Singapore.

As founding director of the David Dillon Center for Texas Architecture, she established the annual Dillon Symposium, which brings together scholars and experts from across disciplines to discuss issues related to architecture and urbanism in north Texas. Topics have ranged from equitable urban development and historic preservation in Freedman's Towns (2019, 2017) to architecture criticism (2013). The Center's growing Oral History of Texas Architecture Project serves as a repository for the memory of the design profession in the region and is growing to include neighborhood histories gathered by students and residents. The Dillon Center works as a partner on research and public programming with non-profits in the region including bcWorkshop, ADEX (formerly the Dallas Center for Architecture), Preservation Dallas, Historic Fort Worth, AIA Dallas, and AIA Fort Worth. For more information visit the Center's blog: https://blog.uta.edu/dilloncenter

Dr. Holliday also serves on the editorial board for Columns Magazine, the AIA Dallas quarterly publication and has contributed frequently to its pages. She is a member of the Board of Directors for Historic Fort Worth, a non-profit dedicated to promoting the value of historic preservation, and chairs its education committee. In the past, she served on the State Board of Review for the Texas Historical Commission's National Register programs between 2009 and 2015 was also a member of the editorial board of the Journal of Architectural Education. Her work has been supported by grants from the the Samuel H. Kress Foundation, the National Park Service Civil Rights Grant program, the Hagley Library, the Dallas Regional Chamber of Commerce, and the SOM Foundation.