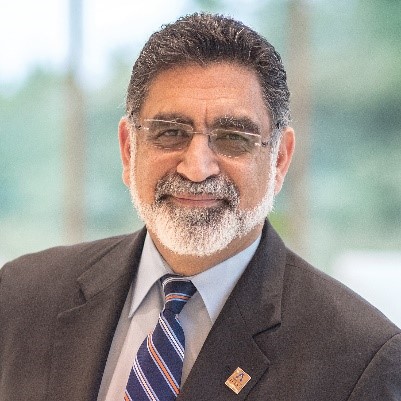 A visionary leader and accomplished scholar, Dr. Vistasp M. Karbhari took office in June 2013 as the eighth president of The University of Texas at Arlington (UTA). As president, he is committed to advancing UTA’s national and international profile while strengthening excellence in research and teaching and ensuring the success of UTA’s students in campus-based and online degree programs in Texas and around the world. In the 2017-18 academic year, UTA served almost 60,000 students through these programs. Under his leadership, UTA has achieved Carnegie R-1 status, was named a Hispanic-Serving Institution, and is ranked as the top educational institution in the State of Texas for Veterans and Adult Learners, in addition to having nationally ranked programs in each of UTA’s schools and colleges. Prior to joining UTA, President Karbhari served at the University of Alabama in Huntsville (2008-2013), the University of California San Diego (1995-2008), and the University of Delaware (1991-1995). A prolific researcher, President Karbhari is an expert in the processing and mechanics of composites, durability of materials, infrastructure rehabilitation, and multi-threat mitigation, and has authored or co-authored more than 460 papers in journals and conference proceedings and edited or co-edited six books. He is a fellow of several pre-eminent research organizations, including the National Academy of Inventors, the American Society of Civil Engineers, ASM International, the International Institute for Fiber-Reinforced Polymers in Construction, the International Society for Structural Health Monitoring of Intelligent Infrastructure, and the ASCE’s Structural Engineering Institute.